The Johannesburg People’s Pride Movement is excited and proud to announce its third annual progressive protest-celebration for justice. We have come far since that seminal moment in September 2012, when our Black sisters and leaders in this queer revolution for justice interrupted the white Johannesburg Pride Parade in the leafy suburbs of Rosebank to demand the observation of a moment of silence to contemplate the state and scope of injustice that especially operates on those of us whose bodies are Black, woman, disabled, migrant and poor, and were beaten, driven over and expressly told to “go back to [our] lokshins.
It was in that moment that we named white-supremacist, capitalist and patriarchal exclusiveness in queer organising spaces as an aberration in our struggle for justice. We were categorical then, as we still are now, that in all our work, we would be led by feminist, anti-racist, anti-ableist and anti-capitalist politics. At our inaugural protest celebration in 2013, as well as our second in 2014, we asserted and proved that our politics must and can be infused with enjoyment, and our enjoyment suffused by our politics, because the personal is political.
Regrettably, we have to announce that owing to unforeseen technical difficulties, our post-march Queer Celebration Concert, at which celebrated queer and allied artists and performers including Nothende, Moshe Ndiki, and Nakhane Toure were confirmed, must be postponed to mid-December.
We will, however, be proceeding with all planned activities leading up to and including the GLOW in the dark march.


Activity 1: Picnic and Edutainment at Constitution Hill (14:00 – 16:00)
There will be a picnic and edutainment programme beginning in the late afternoon. The edutainment programme will consist of Writing/Poetry, Photography/Video Making, Banner/Placard Making, T-shirt Printing, Drawing/Painting, and the pre-march rally call with readings of messages of support.


There will be no braai, sale of food or drinks. Alcoholic beverages of any kind are strongly discouraged and neither JPP nor the management of Constitution Hill will be held responsible for any arrest, injury or any criminal or civil liability for unauthorised consumption on site. Please do not bring any alcohol into the march and preceding activities.
Activity 2: Queer Tour Queer History Tour of Braamfontein and Hillbrow (14:30 - 16:00)
Activists familiar with the queer history of Braamfontein and Hillbrow will congregate 2 groups of 20 people each at Constitution Hill. These two groups will be led on a one-hour walking tour of Braamfontein and Hillbrow. To manage the size of the groups, the tour will be pre-booked.


Activity 3: March (16:00 – 17:30)
The march will leave from and return to Constitution Hill with a route through Hillbrow and Joubert Park and will include guerrilla theatre as a key feature.


ALL ACTIVITIES WILL CEASE AT 17:30
Tomorrow, we will be proceeding with our third protest-celebration. We will be reclaiming the streets of Hillbrow and the night. We will be marching to demand justice for all bodies that occupy this unjust society. We will be drawing particular emphasis to the struggles and resilience of trans-bodies in South Africa and the continent. We will be stomping our feet in celebration of queer anti-apartheid activist, Simon Nkoli, and those Black progressive leaders of the Gays and Lesbians of the Witwatersrand (GLOW) who, in organising that first ever Queer Pride march in Africa in 1992, on the route we will be marching on, knew then what we know now: that none of us can be free unless all of us are free. 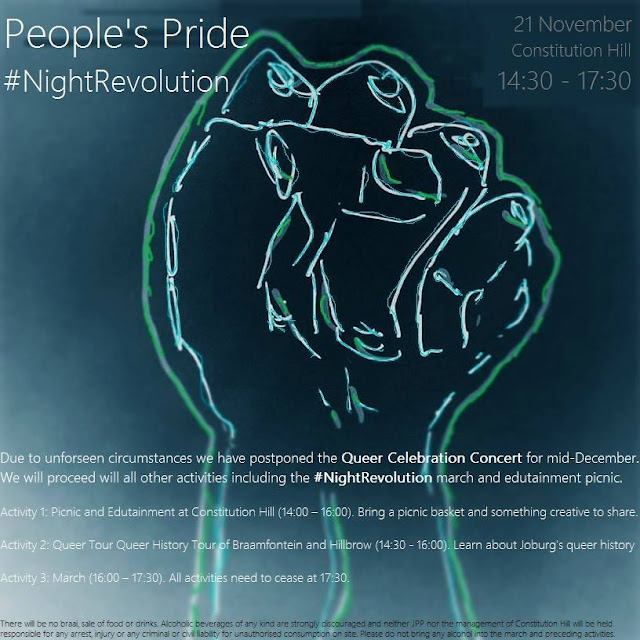 Please note that these comments are moderated. Abusive language and hateful comments will not be posted, thank you.